Prior to her appointment as Minister of State, Ahmed was the Executive Secretary of the Nigerian Extractive Industries Transparency Initiative. (NEITI)

She has over 28 years o experience in accounting and public finance management, starting with the Kaduna state Ministry of finance. Ahmed, also worked in different positions in the defunct Nigerian Telecommunications LImited (NITEL), rising to Chief Financial Officer of MTEL. 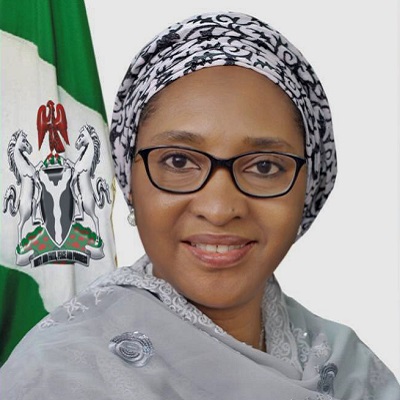 In March 2009, she was appointed Managing Director of Kaduna Investment Company. She was then appointed a member of the National Stakeholders Working Group (NSWG, the Board of NEITI) and later the Executive Secretary of NEITI in October 2010.

Ahmed obtained her first degree in accountancy from the Ahmadu Bello University Zaria, a Masters in Business Administration from the Ogun State University.

Mrs. Zainab Shamsuna Ahmed is Nigeria’s Minister of Finance, a position she assumed in September 2018. Prior to this appointment, she was the Minister of state for Budget and National Planning from 2015 – 2018.

Ahmed is a professional accountant who graduated in 1981 from Ahmadu Bello University, Zaria, Kaduna state. She obtained her master’s degree from the Ogun state University, Ago Iwoye in 2004. She did her National Youth Service in Kaduna State from 1981 – 1982 after which she was employed in 1982 as an Accountant in the Ministry of Finance, Kaduna State. After several promotions in the Ministry, she resigned in 1985 to join the Nigerian Telecommunication Ltd (NITEL). In 2010, Ahmed was appointed as the Executive Secretary and National Coordinator of the Nigeria Extractive Industries Transparency Initiative (NEITI).

Mrs. Zainab Ahmed is an ex-officio member of the ICRC Governing Board.